The mosaic is placed on the façade of the Plovdiv International Fair’s central building. It is positioned on the corner where the southern and western facades meet and takes up equal space on both sides of that corner. It is an interpretation of the ancient Roman god Mercury, patron of tradesmen and travelers. The god’s trademark winged hat is clearly on display above his long curling locks, which fall down his shoulders. Geometric shapes depicting landscapes from Plovdiv intertwine below the face and create the illusion that the messenger of the gods is physically present.

The mosaic is three-dimensional, with parts of Mercury’s face – including his hat – made in relief; the eyebrows, nose, lips, cheekbones, chin-line, and ears are made from roughly worked limestone blocks that stand out from the rest of the opus tessellatum mosaic. Mercury’s wings and the mosaic’s overall outline consist of hand-cut limestone tiles. 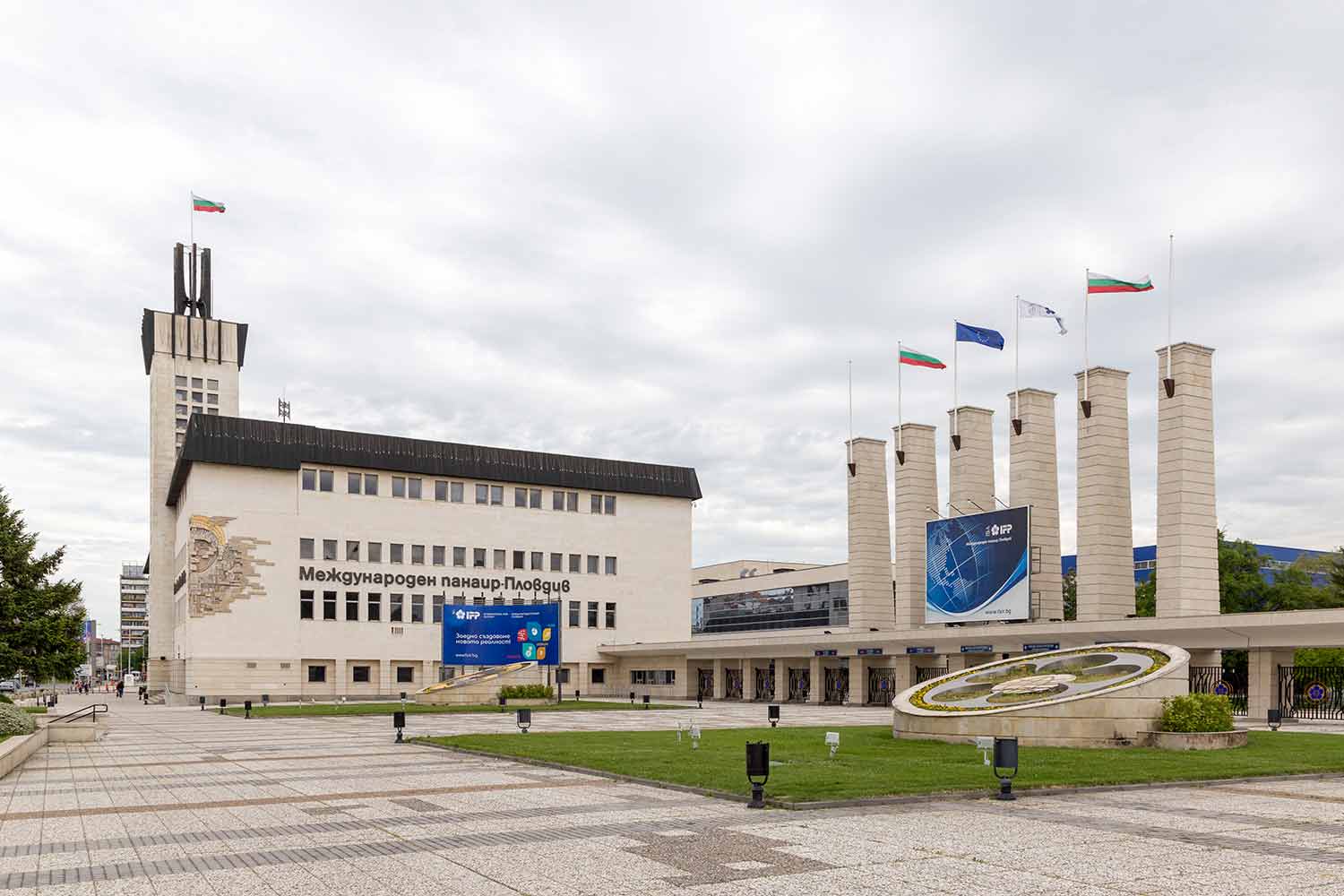 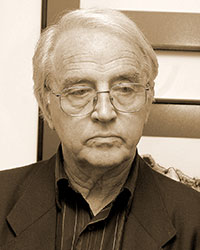 Valentin Starchev was born in 1935 in the city of Stara Zagora, Bulgaria. He graduated from the “Sculpture” program in the National Academy of Art in Sofia in the class of prof. Marko Markov. He has been a member of the Union of Bulgarian Artists (UBA) and since 1979 a member of its managing committee. He has created sculptures and drawings but is most famous for his monumental sculpture. Since 1964, he has taught modelling at the University of Architecture, Civil Engineering, and Geodesy in Sofia, Bulgaria.

His most famous works include:
● the monument “1300 years Bulgaria”, which was formerly in front of the National Palace of Culture, (Sofia, 1981);
● the statue “Pegasus”, which was dedicated to the memory of Bulgarian artists, Sofia;
● the “Fraternal mounds” monuments, which were dedicated to Bulgarian freedom fighters (Pleven, 1970 and Stara Zagora);
● the bust of Bulgarian freedom fighter Kapitan Petko Voyvoda at the Janiculum Hill (Rome, Italy);
● the bust of Bulgarian poet Pencho Slaveikov (Bruntale, Italy).

Valentin Starchev received the following honorary titles and awards: the Dimitrov prize (1980); induction into the Order of the People’s Republic of Bulgaria – second class (1985); and the title People’s Honorary Artist (1986). 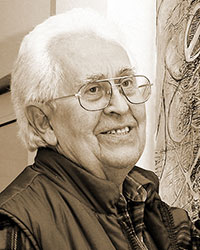 Hristo Stefanov was born in 1931 in the city of Burgas, Bulgaria. His family permanently relocated to Plovdiv in 1935. He graduated in 1956 from the National Academy of Art in Sofia in the class of prof. Nenko Balkanski. He was a member of the Union of Bulgarian Artists (UBA) since 1961 and a member of the famous “Plovdiv group” of artists along with Yoan Leviev, Dimitar Kirov, Encho Pironkov and Georgi Bozhilov-Slona. He actively participated in regional, national, and international exhibitions. He became a member of the managing committee of the UBA in 1970 and since 1971 was involved in the State Committee for Fine and Applied Arts and Aarchitecture. He stayed involved in various branches of the State Committee until his death. His works include paintings, graphics, mosaics, wall paintings, stained glass windows, and scenography. Even his earliest works demonstrated his longstanding interest in monumental art, as is attested by his numerous works in a variety of different techniques – fresco, sgraffito, mosaics, glass and stained glass. He was inspired by the aesthetics and expression of form of the Mexican muralists Diego Rivera, José Clemente Orozco, and David Siqueiros. He created numerous monumental works both in Bulgaria and abroad.

Among these, the following stand out:
● the stone and ceramic mosaic sculpture (3.60 x 21 x 0.25 m) “The communist party victorious” and a decorative glass wall in the foyer of the former communist party building, in collaboration with E. Pironkov and architect Vl. Rangelov; stone and ceramic (Plovdiv, 1969);
● the fresco (50 sq. m.) “Genius and prophet” in the Museum house “Hristo Botev” (Kalofer, 1973);
● the wall painting “Epic of the forgotten” at National library “Ivan Vazov” (Plovdiv, 1974);
● the fresco (25 sq. m.) “Wine and fertility of Thrace” in the restaurant “Puldin”, in collaboration with architects Z. Kirova and N. Mushanov (Plovdiv, 1976);
● the smalt and stone mosaic “Movement” (“Leaving” and “Return” – 2 panels) in the passageway of the Central Railway Station (Sofia, 1976);
● the smalt, metal, and stone mosaic (10 x 8 m.) “Man and the Age of Technology” (“Progress”) on the façade of the House of science and technology; smalt, metal and stone (Karlovo, 1978);
● the fresco (11.20 x 8.40 m.) “Fire” (“Burning in creation”) in hall №7 in the National Palace of Culture, in collaboration with architect Al. Barov (Sofia, 1981);
● the smalt and stone mosaic (48 sq. m.) “Mercury” on the façade of the Plovdiv International Fair’s central building, in collaboration with Valentin Starchev (Plovdiv, 1987);
● the secco wall painting “The stage – life, the life – stage” in the Opera di camera (Blagoevgrad, 1987);
● the smalt, stone, and gold “Memorial of Gotse Delchev’s family” (Blagoevgrad, 1987).

Hristo Stefanov was a scenographer for the plays of director Hristo Hristov – “The Bells of Prespa” and “The Iron Candlestick” (performed in the Plovdiv theater, 1965) – as well as for “Hamlet” (directed by Nikolai Georgiev and performed in the Varna theater, 1967) and “This Small Land” by Georgi Dzhagarov” (performed in the Plovdiv theater, 1976). He was also the production artist for the movies “Iconostasis” (1969) and “Anvil or hammer” (1973).
He received the following honorary titles and awards: the honorary title People’s Artist (1985); induction into the Order of “Saints Cyril and Methodius” – first-class (2002) and the Order “Stara planina” (2002).