The mosaic “Yuri Gagarin” from The roundabout at Plovdiv International Fair

The mosaic panel is located northeast of the roundabout at “Tsar Boris III Obedinitel” Blvd. and “Bulgaria” Blvd. next to the Plovdiv International Fair. It is placed on a monolithic plinth that is three times longer than it is tall; the plinth is situated in such a way that the mosaic panel faces the roundabout.

The panel portrays a male figure with ancient-looking hair and clothing – the ancient Greek figure Icarus, who escaped the Minotaur on the island of Crete with wings made by his father Daedalus. Above his left palm is a circular non-mosaic element – a portrait of Yuri Gagarin in a space suit that was popular at the time of the mosaic’s installation. Beneath the portrait are the dates of Gagarin’s birth, his first flight in open space, and his death.

The technique for the mosaic is opus tessellatum, which is laid in a distinctively stylistic manner.

The tesserae are hewn from natural stone and come in five colors: red, white, ochre, light gray, and dark gray. Most of the tesserae have irregular shapes. Their sizes vary between 2 and 8 cm, and some are even larger.

The mosaic is the work of contractors who most likely laid it in situ on the plinth that was specifically built for it. 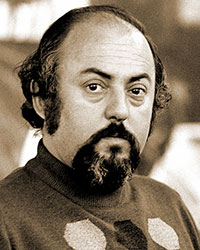 Yoan Leviev was born in 1934 in Plovdiv, Bulgaria to the family of Isaac S. Leviev and Nadejda Panaiotova-Levieva. He graduated in 1958 from the “Decorative-monumental arts” program in the National Academy of Art in Sofia (then called the “High institute for fine arts “Nikolai Pavlovich”). His graduation work under the supervision of prof. Georgi Bogdanov was titled “The Boyana master.” He was a member of the “Plovdiv group” of artists since 1959 and a member of the Union of Bulgarian Artists (UBA) since 1961. He was also an active participant in exhibitions in Bulgaria and abroad. He visited Mexico in 1977 as the chosen representative of an exhibition presenting Bulgarian art, and the visit left a mark on his artistic work. The three most prominent Mexican muralists of the time – Diego Rivera, José Clemente Orozco, and David Siqueiros – were among his aesthetic inspirations. His personal acquaintance with artists like Jorge González Camarena, Rufino Tamayo and José Chávez Morado further increased his interest in monumental art forms. The artist died in 1994 in his home in Plovdiv. His works span from paintings, graphics, and illustrations to monumental art. He used various techniques such as fresco and secco wall painting, sgraffito, and mosaic.

Yoan Leviev received the following honorary titles and awards: induction into the Order “Saint Cyril and Methodius” – first-class (1970); the title Honored Artist (1975); the award for decorative monumental arts “Ilia Petrov” (1983); induction into the Order of the People’s Republic of Bulgaria – second-class (1984); the “1300 years Bulgaria” – honorary insignia and medal (1984); the honorary insignia of the city of Plovdiv – first-class (1984); the painting award “Vladimir Dimitrov – Maistora” from the UBA (1984); and the title Honorary Citizen of Plovdiv (1995).