The Ancient Roman Mosaics of Plovdiv 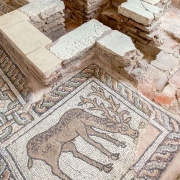 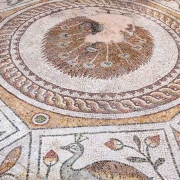 The Episcopal (Bishop’s) Basilica of Philippopolis 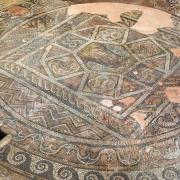 The Roman mosaics of Philippopolis (3-4 century AD) were installed in both public and private buildings primarily in floors, although a few exceptions are wall mosaics. Most of the mosaics were discovered during construction of new buildings and so were investigated either partially or completely during rescue excavations. Some of them were moved to the storage spaces of the archaeological museum in Plovdiv because it was not possible to preserve and exhibit them in their original location. Others were preserved in situ and were either covered with sand or displayed under a protective covering.

The first mosaics were discovered by archaeologist Dimitar Tsonchev in rooms from two partially excavated Roman baths: the Western thermae discovered under the former movie theater “Balkan” (today a bingo hall) between 1938 and 1939 and the Eastern thermae found during construction of the “Yoakim Gruev” school in 1946. Among these mosaics, the maritime scene from the black and white first mosaic floor of the Western thermae stands out. This mosaic depicts a walrus, a sea-centaur (hippocamp), and two dolphins. Except for this scene, the the mosaics from both baths were moved.

During rescue excavations on Djambaz tepe in 1957, archaeologist Liliana Botusharova discovered several square meters of polychrome mosaic, which were moved.

Between 1977 and 1978 during excavations at the site of the “Thracian culture museum” (near Ponedelnik Pazar), archaeologist Valentina Tankova discovered a mosaic that depicts a maritime scene (a sailboat with a boatman at sea with fishes, algae, corals, and the god Eros riding a dolphin). The mosaic is preserved in situ and covered with sand.

The mosaics from these buildings were all moved, and their most impressive parts are displayed in the Archaeological Museum and Trakart Cultural Center (the mosaic from the apodyterium).

During construction works in 1983 on former “Georgi Dimitrov” Blvd. (today “Tsar Boris III Obedinitel” Blvd.), archaeologist Elena Kessiakova discovered a floor mosaic that became known as the mosaic with Allen’s gallinule birds because it depicted a waterbird called Allen’s gallinule (Porphyrio alleni). The mosaic was moved to the archaeological museum, where its most striking aspects are exhibited.

During renovations of former “Georgi Dimitrov” Blvd. (today “Tsar Boris III Obedinitel” Blvd.) and the construction of an underpass in 1983, archaeologist Elena Kessiakova excavated a residential building from the Roman period. The most impressive part of the building consisted of an exedra and three rooms. Two of these rooms had mosaic floors, which were lifted and moved. Kessiakova named the building “The Residence”.

The late antique building “Eirene” and nearby Roman street with a crossroads were discovered by archaeologists Zdravko Karov and Mina Bospachieva in 1983-1984 when the old “Georgi Dimitrov” Blvd. (today “Tsar Boris III Obedinitel” Blvd.) underwent renovations and an underpass was built. Mosaics found in the so-called “Eirene” building, which is preserved along a Roman decumanus (east-west oriented street), are preserved in situ.

The Great basilica was discovered and excavated by archaeologist Elena Kessiakova during rescue excavations in 1983 – 1986. The excavations were renewed in 2015 as part of a large-scale conservation and restoration project, which also included displaying the mosaics from the basilica now called “The Episcopal (Bishop’s) basilica of Philippopolis”.

In 1988 during rescue excavations for construction of an apartment building (№23) on “Lilyana Dimitrova” Blvd. (today “Maria Luisa” Blvd.), archaeologist Mina Bospachieva discovered part of the fortification walls of Philippopolis and an early Christian basilica west of them (1990-1991). Since this building was smaller than the Great basilica, it was called the Small basilica.

During rescue excavations in a private plot on “Mara Gidik” Str./“Neofit Bozveli” Str., archaeologist Mina Bospachieva excavated a six-conch building (an early Christian martyrium) with a polychrome mosaic floor, which was lifted and moved.

In a section of “Georgi Terter” Str., archaeologist Mina Bospachieva investigated what was most probably a part of the Eastern thermae (first excavated by Tsonchev, in 1946). Here she uncovered parts of a floor mosaic that covered a large rectangular room with heated floors via a hypocaust system. The mosaic was removed by a team of conservators led by Elena Kantareva-Decheva.

In 2005, archaeologist Ivo Topalilov uncovered a polychrome floor mosaic in a room of an early Christian building from Late Antiquity on “Pushkin” Str. 4. The mosaic was moved, and a part of it can be seen in the archaeological museum.

The floor mosaics of Philippopolis consist of a base and a mosaic layer (tessellatum). Over the leveled earthen floor of the room are placed stone blocks or brick fragments (statumen). In order to strengthen and level this base, a layer of mortar with inclusions of larger stones and/or bricks (rudus) is placed over the statumen. The next layer (the nucleus) is thinner and contains similar but smaller inclusions. In a few cases, a previous flooring served as the base: an opus signinum floor in the Episcopal basilica phase I and Eirene building phase II, pavement’s marble slabs in Eirene building phase II, and Roman bricks for the flooring of the Small Basilica’s baptistery.

The mosaic layer (tessellatum) consists of fine mortar and the tesserae (mosaic cubes) placed in it. The tesserae were made from various local rock types and brick, but parts of some mosaics like an emblem or center panel were made from glass (smalt) (the Narcissus panel, the mosaic with Allen’s gallinule birds, the maritime scene with the god Eros, the mosaics of synagogue phase I, and those of Eirene phase I). Preparation work for making the tesserae was done in situ.

The mosaic technique is opus tessellatum, but for some parts like the emblem or center panel the ancient craftsmen used opus vermiculatum, as in the mosaic floors of Eastern thermae phase I, the Narcissus emblem, the mosaic with Allen’s gallinule birds, the maritime scene with the god Eros, the mosaics of synagogue phase I, and those of Eirene phase I). The mosaic technique opus sectile uses significantly larger tesserae in the form of tiles with different shapes. This technique is attested in the presbytery of the Episcopal basilica phase II. Opus signinum is a lime-mortar floor made from a statumen, rudus, and a mortar layer either with or without single stones and brick fragments (ex. as seen in the mosaics of Eirene phase I and the Episcopal basilica).

The mosaics of Philippopolis depict geometric, floral, and figural images that are characteristic for the time period and found in the other eastern provinces of the Roman empire.

The floor mosaics in Philippopolis were laid during construction, renovation, and restoration works in public and private buildings between the 2nd and 6th centuries AD.

The first mosaic workshops in Philippopolis appeared in the 2nd century and initially followed the fashions prevalent in the Italic centers of mosaic production. This is seen, for example, in the Western thermae’s first mosaic floor. Under the influence of eastern mosaic workshops and with the participation of their craftsmen from the 4th century onward, local workshops began creating polychrome mosaics with intricate geometric and ornamental compositions that included a wide variety of pre- and early Christian symbols.

The mosaic from the Western thermae, which was laid around the mid-2nd century, displays italic examples and was probably made by artisans from Rome. The mosaic is black and white, but red tesserae (made from brick) are included in the face and right hand of the centaur in the maritime scene.

The mosaic in the “Narcissus building” and the mosaic with Allen’s gallinule birds were placed in the first half of the 3rd century. These mosaics are examples of the emblem-figural type of mosaic in which polychrome figures predominate over the geometric black and white panels.

The mosaics from the newly renovated Western thermae and newly built Eastern thermae were placed in the second half of the 3rd century – a time when Philippopolis was being restored after the Goths sack of 251. These mosaics mark the transition from black and white (monochromatic) to multicolored (polychrome) mosaic, in which black and white patterns are framed by intricate designs in several other colors (ex. Western thermae II). Black, white, and dark and light ochre feature in the polychrome mosaics of the Eastern thermae.

The Synagogue was built in the second half of the 3rd century, and its prayer hall was partially covered by a polychrome mosaic with three rectangular panels, the center of which holds the image of a menorah.

The polychrome mosaic in two of the halls in the “Residence building” were laid in the first half of the 4th century, and the first mosaic floor in the nave of the Episcopal basilica was installed around the mid-4th century. The mosaics from the first construction period of the “Eirene building” (banquet hall and southern portico), date from the second half of the 4th century. Those from the second construction period, to which belong the vestibule, eastern portico, reception room, apse room, and room 10, date from the end of the 4th or beginning of the 5th century.

The mosaic from Jambaz tepe and the one with the maritime scene with the god Eros (“Thracian Art Museum” site) were laid before the end of the 4th century when the mosaics in the aisles of the Episcopal basilica were installed (these are the mosaics with a donor inscription in which part of a bishop’s name can be read).

The second mosaic in the Synagogue was laid around the middle of the 5th century. In the second half of this century was laid the mosaic floor in the Small Basilica as well as the mosaics in the narthex of the Episcopal basilica and in one of the rooms in the early Christian building at “Pushkin” Str. 4. The mosaic in the early Christian martyrium was done towards the end of the 4th or beginning of the 5th century. 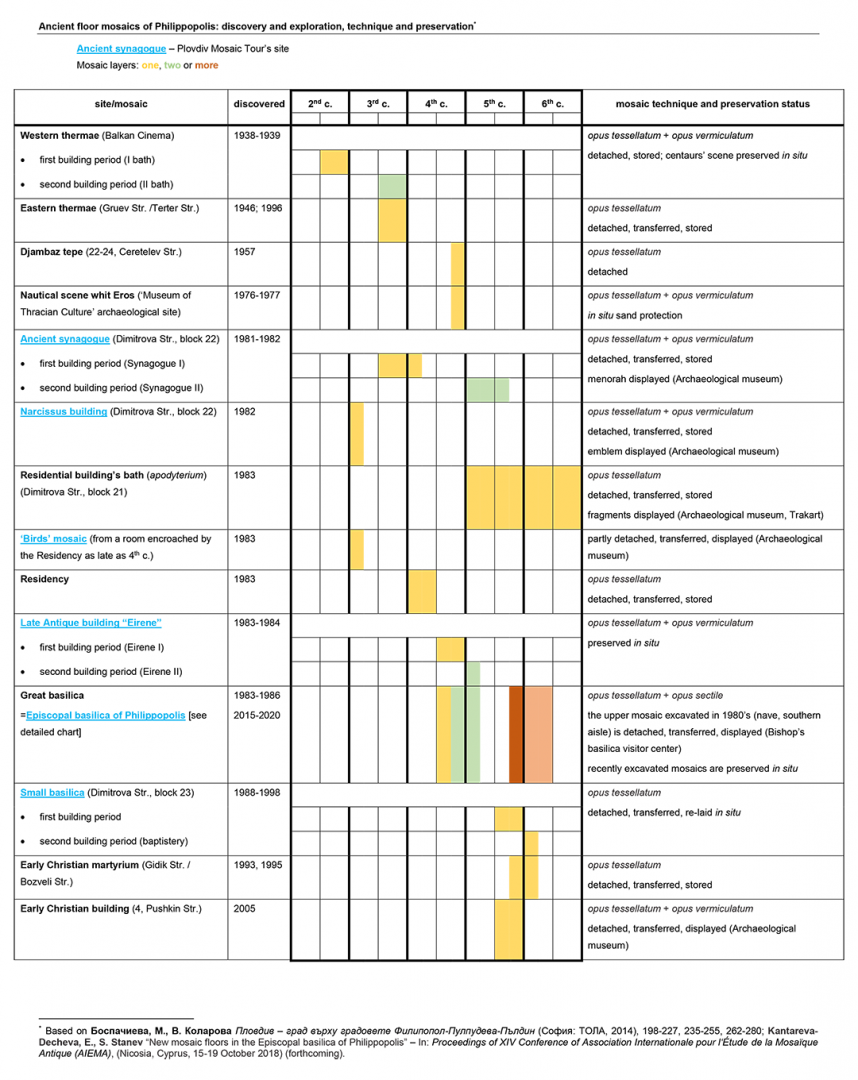